Ajay Chemicals was formed in 1972 by Abner Towers and John Trotter. Formerly a chemist and a sales executive, respectively, Towers and Trotter saw an opportunity in the U.S. textile industry for better dye-oxidation technology based upon the element iodine. Beginning with potassium iodate as this oxidizer, the two men launched a company that grew from experiments in John Trotter’s kitchen to one of the world leaders in iodine-based chemicals.

As the pharmaceutical and industrial use of iodine grew in Europe, Ajay Chemicals expanded their iodine production and distribution capabilities. In 1992, the company built its second manufacturing and distribution facility – Ajay Europe Sarl, Evron, France – to serve the European, Middle Eastern and African markets.

Today, the Ajay-SQM Group is one of the top industrial chemical suppliers and still leads the market with strength of supply and product quality. In 2007, the group went a step further by introducing the Iodeal Brand™ of products, which represents the company’s commitment to its customers. The Iodeal Brand™ is essentially a promise to customers that they can depend on every product to be manufactured with consistent processes, consistent standards, and consistent quality, no matter the ASG facility in which the material is produced. The company’s goal is simple: to give valued customers peace of mind that the iodine products on which they bank the success of their own companies have been given the utmost care and attention. 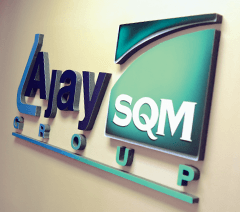